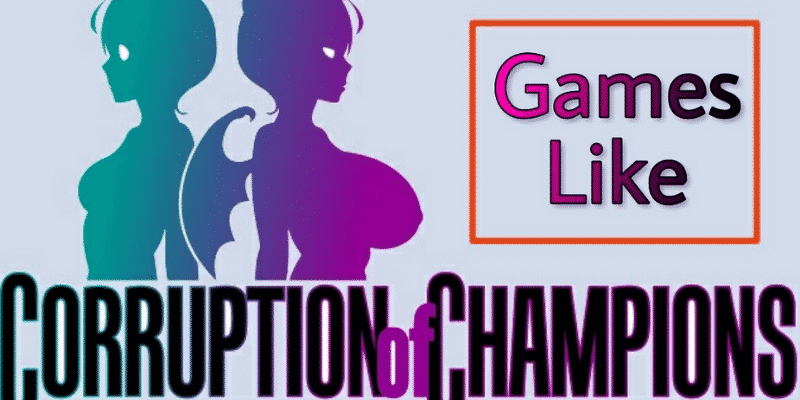 Games like corruption of champions: Games are an excellent way of refreshing one’s mood. Whether it is an idle time off from work or a long hard day, games never disappoint their players.

We all know that there is numerous count of game genres on the internet. Action, adventure, arcade, etc. are some of the mainstream ones.

Most of us won’t know that there also exist some underground genres like erotica, adult, and more. While most of the gaming enthusiasts rely on the primary kinds for their refreshment, remaining ones try new games that are not that famous on the internet.

Note
If you want to play Mini Militia on your PC, then check out this guide.

You will be able to play the game with a keyboard and mouse using the method mentioned.

Here’s a short introduction to what Corruption of champion is. Corruption Of Champions is an online text and browser-based adult flash game.

The game is not so well known among gamers, but it still has outstanding reviews that shoot straight out of players who have tried this fantastic piece.

What Is Corruption Of Champions?

As mentioned above, the Corruption of Champions is an interactive browser-based flash game that falls under the adult category.

The game follows the story of a character who is an extradited citizen of a village. A custom of choosing a Champion every year based on battles revolves around the town.

So, the citizens of the city send the character to a mystical dimension through a portal. The player has the full choice of either fighting the evil or joining it in the demon world.

How To Play Corruption Of Champions?

Aforementioned, Corruption of Champion is an online browser-based text game that can be played by anyone provided they have a high-speed active internet connection on their system.

At the time of writing this post, Corruption of Champions does not have its official website. However, the game is hosted on a gaming platform known as Fenoxo.

The game has several non-playable characters in addition to our avatar. A brief introduction of almost all the characters is provided below.

The Player: The player belongs to a small place named Ingnam, which is a village known for its traditions and vibrant culture.

Every year, a champion is chosen that is sent to the Dark Demon Realm for battles. A rumor also revolves around the village which says that if the town fails to submit a champion to the demon realm, chaos and disaster spread around the city.

Diseases, infertility, and disappearance of citizens start taking place. To avoid this crisis, the villagers decide to choose a champion amongst them every year.

The player has complete control over the name and appearance of the character. Gender, skills, and abilities are some of the other aspects to take care of. Perks are also a feature of the game and can be enhanced by leveling up.

Camp Recruits: As the name suggests, these are characters that can be recruited into camps by the leading controllable player. Camp Recruits have special menus that allow our players to perform individual actions like buying, selling, sexual activities, and item collections.

Persistent Characters: Persistent characters are quite the opposite of Camp Recruits. They can not be recruited into camps by the player, and their actions have a direct effect on the experience and grading system of our player.

Encounters: Encounters are the enemies that our player faces during the gameplay. Each time a new random enemy is spawned, that means, a player cannot reencounter the same foe.

There are several items that the player can use and interact with. Items have special effects in the game and can affect the route of the game as well as the ending.

We mentioned above that Corruption of Champions is available for desktop browsers using any flash plugin.

Corruption of Champions game can be played on any android smartphone using the APK that has been packed by the developers.

The apk can be downloaded for free and can be installed on any device. Here is the link to download the Corruption of Champions APK for free.

How To Install Corruption Of Champions APK

Once you have downloaded the Corruption of Champions APK from the above source, it’s time to install the downloaded package.

The installation is a piece of cake, but since some users find it hard to proceed further, we have provided this step by step guide on How to install Corruption Of Champions APk on your android smartphone.

Here is the list of best Corruption of Champions Alternatives that are available for free play on the internet.

1.Carnal Souls: Carnal Souls is the best alternative to Corruption of Champions. This is because of its feature-rich gameplay and exciting story.

Carnal Souls is the game that will satisfy your gaming hunger. Just like the corruption of Champions, this game also provides a text-based role-playing gaming experience to all its players.

2. Trials In Tainted Space: This game matches the genre of Corruption of Champions. Yes, you guessed it right. Trials in tainted space is an adult browser-based fantasy game that is available to play for free.

Some sources also say that this game is a successor to Corruption of Champions when it comes to storyline and graphics. 3. Kingdom Of Loathing: Kingdom of Loathing is also one of the best alternatives to Corruption of Champions because of its engaging storyline and simple graphics.

The game was developed by an individual developer named Zack along with his small team. Kingdom of Loathing is a turn-based fantasy game where the player has to collect points by fighting realistic monsters in the mystic world.

Summing everything up, we can say that Corruption of Champions is a game that must be tried once in your lifetime.

The game has almost everything, from action to sensible content, story and drama, and a bit of perviness too.

Few other games resemble the gameplay of Corruption of Champions. We have mentioned the best three out of the Trials in tainted Space, Kingdom of Loathing, and Carnal Souls.

We also provided a detailed guide on how to download and install Corruption of Champions apk game on your android smartphone.

Feel free to comment on any issues you face while installing or downloading the game.