Samsung is a trendy brand that is known for creating smart televisions. A progressive leader under the niche, it produces the best televisions. Boasting a QLED screen, the company’s TV has a bright and vibrant display. The TV images are sharp and clear with the quantum dots-based technology responsible for the emission of light and brightness.

Despite being equipped with such advanced technology, the Samsung televisions are very affordable. The 4k and 8k displays are framed within a sturdy frame with excellent specs. They also provide regular updates that ensure that you keep up with the technology and it runs smoothly.

Samsung certainly lives up to the hype. But are you wondering if this is the television that would last you for a long while? How long do Samsung TVs last? If yes, we have penned down all the questions you might have regarding the Samsung TV lifespan and why it is worth the investment!

How Long Do Samsung TVs Last?

Samsung being the proficient brand in the television industry that has established itself for its impressive specs. The materials used in the making of Samsung televisions are sturdy, and the structure is well built. Given these reasons, you can expect your television to give you good mileage. But of course, it is also influenced by the type of usage and care.

For the heavily used device, the average Samsung TV lifespan is between 4.5 and 7 years. The range is pretty standard amongst the other competitor televisions. Heavy usage refers to when a television is used almost every day with high brightness and sound.

Lightly used televisions tend to last 10 years, if not more, with proper care and maintenance. 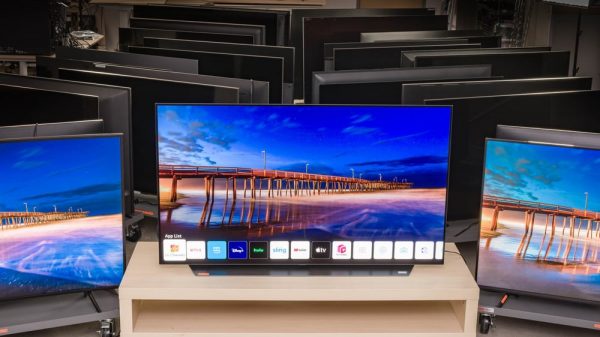 The Most Prone Parts Of Samsung TVs

Even after having a sturdy build, certain parts of the televisions are prone to damage or break apart.

The part of LED Samsung television that tends to fall apart first is the Backlights. It is something quite common amongst LED televisions. This is so because:

In the case of the OLED version of Samsung televisions, the most prone part is the screen. Here’s what happens:

But as it is with other goods as well, life span depends on maintenance. Neglection and improper care can severely reduce the lifespan and can ruin the television early on.

Smart TVs: How long do they last?

Smart TVs of well-known brands are known for their long life span. Since they make quality goods, their televisions boast a life span of 7 years. If taken care of properly, they might even last longer. A finely maintained Smart TV is expected to last for almost 10 years or more.

Samsung televisions conform to a warranty period of 1 year. But this is not a constant figure. The warranty period is subject to change according to the seller’s location and the residence of the user. You may also avail of some third-party services that will extend your warranty period.

For more information on the warranty period offered by Samsung, you can refer to the official website.

Can you play Video Games on Samsung TVs?

The TVs are backed by some of the fastest and elegant features that add to the gaming experience. With added features like Fast refresh rates, HDMI 2.1 port, and low battery consumption mode, they allow you to make its best use for video games.

Leaving the TV screen on without any usage for a prolonged period can severely damage the screen. The constant use of standby mode causes the screen to ‘burn-in.’ The circulation of heat without the TV having a moment to cool down would break the backlights, and the TV screen would lose its brightness.

The placement of the TV

Placing television in a safe place is important. It shouldn’t be near the ground as it would cause dust to settle in. placing near the sun and any heating devices like woodstove would damage the TV. It should be mounted securely to avoid the risk of it falling down.

Setting the brightness to the highest level would burn the backlights. As we mentioned earlier, it would cause ‘burn it,’ i.e., some images would be forever engraved on the screen. Using the high brightness for some time is completely alright, but using it for too long can cause problems.

Long-lasting TV brands usually include the top-end brands which offer the best quality products. The materials used in the making are highly durable and reliable. The best companies that provide you the best deals on televisions with a long lifespan are:

Samsung is the reigning champion in terms of the longevity of its televisions. They boast the brightest and most vibrant display with superior QLED technology. Backed with a Quantum Dot Light Emitting Diode (QLED), it tends to give sharp and clear images. This display is adorned with a large and sturdy build frame and body.

The materials employed in making the body and components of the televisions are highly durable and would survive for a long time. Given the television receives proper care, it would last at least 10 years, if not more.

Sony is another tech giant when it comes to making reliable televisions. The company produces solid televisions that promise to last you long years of usage. Contrary to Samsung, Sony uses OLED (Organic Light-Emitting Diode) technology. The display is self-emitting and tends to give brighter and sharper images than QLED technology-backed televisions.

The pixels have independent control over themselves and produce their own light. It is outstanding in combating darker displays with different hues of black without blending in with the surroundings.

The LG company has established itself as a well-known brand. They produce some of the premium quality television that is in the top conditions. The quality is fantastic and provides excellent clarity. Backed with the OLED technology, this company’s television offers an independent pixelated screen.

It has a fast response rate and power-ups way faster than other competitors. Motion blurring and pixel blending, as a result, are entirely absent from these televisions. And given these specs, gamers adore this brand.

Panasonic is one of the oldest companies in the market that has been manufacturing televisions for decades. This expertise has blended in on their latest intelligent TVs, giving us highly reliable and durable products. Being energy efficient, they also save up on electricity charges.

And that is not all. The color contrast and hues offered by the company match the supreme quality of the pictures. The display is sharp and clear.

How to Prolong the Lifespan of TV?

Just leaving the television be, once bought, without any care and maintenance would cut short its life span. And even the usage period would be accounted for with hindrances and display issues. And none of these Smart TVs come cheap. So, if you plan to make the most out of your televisions, then you must follow the given measures:

Turn off the TV when not in use.

When the television is no longer in use, it is best to switch it off. It would ensure that the backlights won’t burn off. The constant usage can also depreciate the quality of the components considering that they won’t have to cool down and restore.

The unwarranted usage would also add to the electricity bill. So, make sure to give the television rest from work.

Placement of the television is just as important. It would keep the television safe from both physical and internal harm. It should be mounted at a safe distance from the ground and away from wandering hands. Dust collection inside the television can hinder its life span.

Air circulation around and inside the television should be proper too. While being wall-mounted, there should be a distance of at least 2 inches between the back of the TV and the wall. Around the sides, a 4-inch distance should be available.

Keep it away from any source of heat. A considerable distance from the sun, as well as any cooking place, should be maintained. Overheating can melt some components and stop their functioning.

Create a schedule to clean the TV regularly. Dust settled on the screen, and the sides can clog up the ventilation. The air would be unable to circulate, and the insides would heat up considerably. This can cause the insides of the wire to melt up or cause problems while functioning.

For safe cleaning, use a microfiber cloth. The screen should be cleaned gently and with proper safety precautions. The cleaning liquids should be strictly avoided on the screen. As for the sides, a duster can be used. Never use any liquid cleaning material near the ventilation.

Set the brightness to the right level

People often misunderstand that higher brightness means better picture and display quality. But it is obviously not the case. Not only does it not give you better quality, but it also ends up damaging your television. So set the brightness level at a place where it is required. Exceptional circumstances within a limited time frame are bearable by the TV, but prolonged usage can cause permanent damages.

Use an Automatic Voltage Regulator

A sudden change in the voltage can easily damage the TV forever and render it useless. Only a single jolt is enough to give your TV irreparable damages. Installing an Automatic Voltage Regulator, also known as a surge protector, will keep your device safe. It controls and mitigates the amount of voltage received by the television. It ensures that any excess amount of electricity stays away.

Samsung TVs are the epitome of long-lasting TVs. But as good as any television is, they won’t survive if proper care doesn’t take place. So if you plan to keep your expensive television around for a long time, then follow all the steps listed in our guide! It will ensure that your television will function for a long time and won’t give you trouble in the middle!