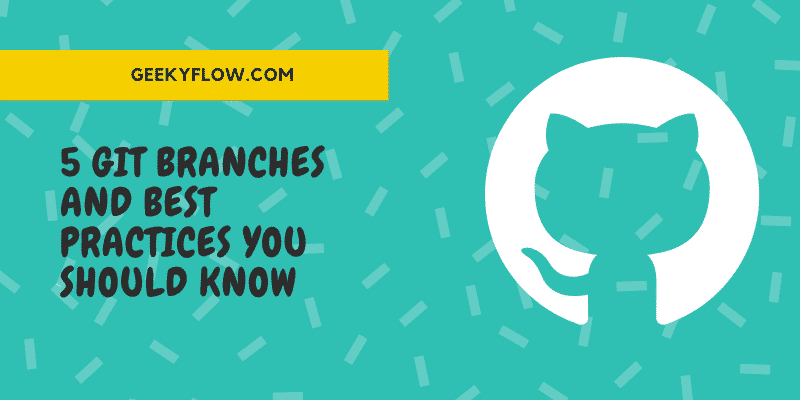 Most of you probably know how to build branches, attach remote branches to them and push commitments to them, but are you familiar with the naming conventions in your repository for each branch?

You need to have several branches and follow git branches best practices in your git repository to handle your work if you are working on a medium or large-sized project.

Here are some of the numerous branch groups that people create:

You don’t have to follow all these examples, for that matter, or any of them. For your project, you need to determine what kind of branches are best. But by showing these examples, the main argument I’m trying to make is that you can’t do all of these on a single branch at once.

Suppose you commit something on a single branch. In that case, someone can alert you of a high-priority bug while you’re working on a feature and an unfinished part of it has been synced to the repository, and now you’re stuck because the completion of the quality can’t be hurried.

This is the default branch in the Git. It was known as Master earlier but recently the name change was announced by GitHub.  And in order to do something in git, you must have this branch. But this branch is reserved for large numbers of squashed/rebased commits that create a new version number. As a consequence, a version tag is used for all commits in the master branch.

An alternative to committing complete releases at once to the main branch is to position each release in its own branch. And then use individual branches for bug fixes and security patches.

The Main branch will represent the current development status, removing the need for a separate branch to produce a catch-all.

You should mark the branches as a release-VERSION NUMBER and add the necessary pre-release indicator (alpha, beta, rc1, rc2, etc.) at the end of this pre-release.

If you need this depends on whether by cloning the master branch you want individuals to get your program’s latest release. If you do, then all your pre-release progress on a separate branch will need to be staged.

Develop one of these for each function you are working on, also known collectively as subject divisions.

For each bugfix you are working on, you can create topic branches as well. Except that these branches typically have a smaller number of commits, it functions the same way as creating a branch for a function.

A convenient way to visualize how many commits are in your subject branch is git log —graph —all —oneline.

In any case, make sure you rebase the branch so that you do not end up committing dozens of commits at once to master, bloating the repository when you’re ready to merge the branch to master.

This command will flatten all your commits to a single large commit, and it has a user interface to guide you through the process.

The essence of the continual introduction of new technology and versions of their applications by agile teams, release branches, and even version numbers are unacceptable for such projects. Each software update, however, needs to have a tag so that it can easily be cloned.

Agile teams may use a necessary convention to tag their releases using the current date and time. The releases can then be reviewed by QA teams on each tag and marked as good or bad.

You need to make an alias first to tag by date/time easily. This is not completely important, and it just allows you to enter the git datetag, which is much simpler than typing the complete order.

Now, any time you run the git datetag, a tag with a specific date and time as its name, nothing else, no prefix, will be generated. This means that you set up the workflow so that only commits that are complete releases are received by the main branch (or whatever branch you are using for stage releases) to apply a release tag to any commit.

You should probably use a branch other than master for this reason if you go this path to transfer the name to third-party integrations such as TeamCity.

So you can create many different branches from time to time in your Git repository. But the most important thing to remember is never messed up with your main branch. It’s one of the most essential branches and used by your other team members to create a new branch.

Let me know if I have missed any critical branch best practice. I would love to hear from you.